Waitangi Soda Springs are geothermal pools located in a secluded spot surrounded by nature.
The pools are an important part of Maori culture and have been used historically for healing, particularity arthritis, muscle and joint problems. Also traditionally used for relaxation, education and food preparation, local people are keen to preserve and protect the area for future generations.
At 35 minutes from Rotorua, its slightly off the beaten track, but well worth a visit. With a unique mineral make up, you can enjoy the soothing properties of the water and leave all your troubles behind. 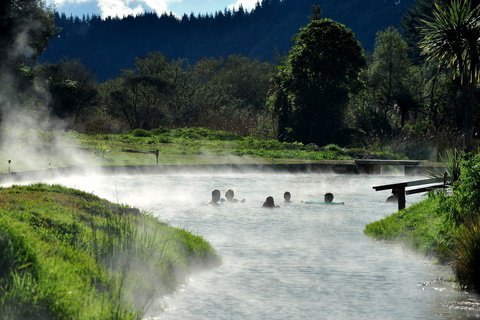 Get directions
Is this your business?Claim Listing

My cousin took our kids (5 combined) on the evening of October 1st from 8pm-9pm. When they returned I asked how it was and she said fine but it was extremely dark. There was no light on the bathing area and the kids couldn’t use the bathroom because it was pitch black. The next morning my daughter told me that she left her woollen jersey there, so we went back first thing to pick it up. When I arrived the lady said that she is sure it wouldn’t be there anymore because they throw all the clothes away the next day. She said there are signs stating this - but I don’t know how you are meant to be able to read the signs in the dark. I thought this was a bit shocking but we wanted to check anyway, even though the lady kept saying it’s probably not there, they’ve probably thrown it away, but it was still there - in a cubby in the corner, which would’ve been very hard to miss in the pitch black. As we left she said we’re lucky it hadn’t been chucked. So I said, “I hope you don’t actually chuck them.” She again said they do. So I said, “but in this case, it’s a good quality jersey, you could recycle it or give it to someone who might need it.” But not only was she not interested in me making this suggestion, she just walked away while I was speaking, “no, no, we just chuck it” So I yelled out, “ok, I just think you could do better than that for this kind of stuff” We got in the car and as I was leaving a large man came out of the office and approached my car. I put the window down and I said “Hi”. He said very aggressively, “What’s your problem?!” I said “Nothing, I was just making a suggestion about giving the good clothes away to someone who might need them. What’s wrong with that?” He rolled his eyes and yelled, “Yeah right, and then I’ll be left with piles and piles of clothes! What am I supposed to do with them?” I couldn’t believe what was happening. I was a customer making a suggestion, not even a complaint, and the response was to aggressively approach me in my car full of kids and treat me like I had insulted them and deserved to be rebuked. I was so flabbergasted by his behaviour that I called him a moron and left, while he shouted, “Why don’t you come here and say that” (threatening a customer) and then they were both shouting that I was not welcome back. So to summarise, this is what is wrong with this place but especially the people running it: 1. The lack of lighting is a health and safety issue. 2. You can’t state there are signs telling people that they throw clothes away that they leave behind if there is not enough lighting to read the signs. 3. Even if I had made a suggestion that they had considered and dismissed, they could have just smiled and nodded. 4. I do still actually think that a nice woollen jersey can find a better home than the tip! Even if they gave it away to kids in their family I’d be happy. In an area that is so naturally beautiful I thought they would care more about the environment, but apparently not. 5. There is NEVER EVER any reason to aggressively approach a woman and her children in her car to berate her. As a fellow brown person I was disgusted, even more so at the final threats as I left. These people, with their ignorance and brutish behaviour are the reasons why stereotypes exist. 6. They need serious lessons in customer service and common courtesy to learn that threatening your customers is probably not the best way to run a business. You would think this was a no-brainer, but I guess they just don’t have brains. I will never go back there again and I warn anyone who does not to make any suggestions for how they can improve their service. If you ever do see a suggestion box there they’ll probably be tipping the suggestions out by the side of the road every night because that is how much they care about the environment and their customers.

The biggest draw card of this swimming hole is it’s mineral waters and also it’s low-key, undeveloped charm. Owned by the local Maori it was once by invite only and had no changing facilities. Now it is run by the local tribe who charge a small fee for entry and have tidied the place up and put in some changing rooms. A great spot surrounded by lush farmland.

The natural beauty and healing waters

This place is great, and pretty unknown. It used to be that you had to call the local Iwi and get permission to enter the land and use the hot springs, but these days they have opened it to the public and added some basic facilities. The entry fee is pretty low (unlike somewhere touristy like Polyesian Spa) and Waitangi Springs is away from it all and a really great find. It's located near Lake Rotoiti and Rotoma