There is no better place to watch game than at the home of Auckland rugby since 1914, Eden Park. It goes without saying that any All Blacks match held in the city occurs here. Thanks to the 2011 Rugby World Cup and a $190 million refit, the majority of the seating is now covered in a plastic sheath, keeping the moisture out.

Eden Park has also hosted the British Empire Games, a Soviet Olympic gymnastics display, the Rugby League World Cup final and a visit by the Dalai Lama. Try wrangling yourself into a corporate box. You may be further from the action, but there's no drama at the beer queue.

Awesome stadium and right next to kingsland

Must visit mount eden stadium at least once to watch a rugby game! Always a buzzing atmosphere, especially when the All Blacks are playing!

Spend a night cheering your home team to victory.

Eden Park is a really great place to come and watch a game of cricket or rugby. The staff are really helpful with helping you find your seat and there are heaps of places to get snacks. It has a really great vibe about it. 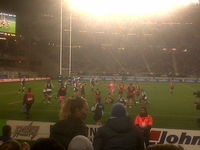 Soooo many memories!!! 2011 and more, great times, great tour, site of the Power Rangers scenery and home to a number of great teams! Shame about parking but this doesn't stop it being a great venue!

I have been coming here for years and years and I really think Eden Park has a certain vibe about it,  Great vibes and great hot dogs ! 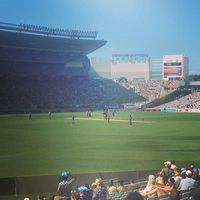 This week I headed to Eden Park for three days to watch the Black Caps vs England test match. It was a nail biter to put it lightly. Aside from the actual test the stadium itself is world class, spacious and easy to navigate. The only department that could do with some improvement is the food, someone needs to sort out their burgers! 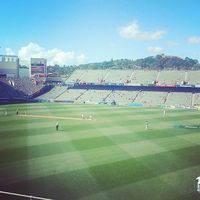 I love games at Eden Park, especially after the RWC do up!  Also had a chance to volunteer there for Red Nose Day and they made it into a fabulous day for all of us! 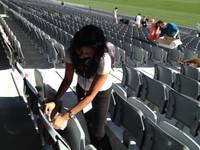 I recently went to Eden Park to take in the cricket. I am really impressed with how great the park is looking. They obviously gave it a massive make over for the Rugby World Cup. Its a park that we Aucklanders can be really proud of